And a whole lot of fun

Our journey started with a 14 hour flight from Santiago, Chile  to Paris, a short layover there and later a one hour flight to what we are going to be calling home for a year, Montpellier.

Popping bottles to celebrate on the plane :p

As girls we need a lot of stuff and we were allowed to take 2 giant 23 kg suitcases each so obviously they were filled to the limit. This was not an issue at the airport in Chile as we had our whole gang of family and friends to help us out. But upon arrival it was a different story. Montpellier-Méditerranée Airport is just about 10 km from downtown Montpellier, and with all our luggage we would’ve had to take a taxi each for about 30 euros,which we did not want to pay. So the option was to take the shuttle service that would get us to the tram station which we would later have to take to get to our hostel, all for just 3 euros.

This is when it got interesting.The 5 of us began trying to get all of our luggage onto the already packed shuttle, we took a good 10 minutes to make things fit, while people gave us dirty looks and speaking -and swearing-in french trying to get us off the shuttle.Thankfully at the stop we had a couple of guy friends waiting  to help us out and got to the hostel with them.

Now why did I carry so much luggage? Everyone told me “but you can buy stuff once you get there” , true, but I’d much rather spend my money travelling than buying clothes.

We stayed at a hostel that’s part of  Hostelling International, which in France is called “Auberge de Jeunesse” and paid about 38 euros for two nights with breakfast included. The hostel was nice and clean, and we had a whole room to ourselves. 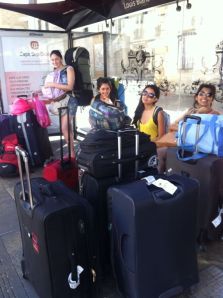 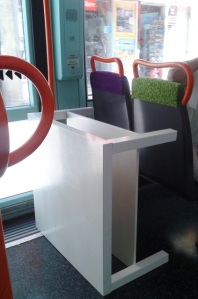 Getting our new coffee table home.

After finding ourselves an apartment, we had to again accomplish the feat of carrying  the bags to our place. We haven’t only had to carry bags, but also furniture. In France people throw out decent and clean furniture and we were told that if we wanted we could just take them. At first I was a little hesitant about this, but once here we realized it’s actually pretty normal. So far we’ve found nicet enough furniture and bringing it home has been quite the adventure.

So far, all these experiences have been a part of the big picture, this is what we came here to do, handle things by ourselves even if at the moment we feel exhausted, after it’s all done we look back and can’t help but laugh 🙂