Kerala is a south-western Indian state that offers good weather almost all year round and great places to explore.

During one of my trips to India my family and I stayed in a houseboat for a night. These houseboats, originally called “Kettuvallams” were used to carry rice and spices and now have been remodeled to serve tourists with the unique experience of navigating the backwaters of Kerala, which consists of a series of canals, rivers and lakes that interconnect and meet with sea water from the Arabian Sea.

END_OF_DOCUMENT_TOKEN_TO_BE_REPLACED

One of the perks of living in Montpellier is that it’s located close to many beautiful french cities and just hours away from Barcelona. This is perfect for cheap short weekend trips, and following last week’s trip to Nîmes, I decided to get out of Montpellier on Saturday and spend the day in Sète,a port city with a series of canals that connect the lake “Étang de Thau”, which is the second largest french lake, to the Mediterranean. The city is situated at the foot of Mount St. Clarie and it’s the most important port in the region. It doesn’t have big museums or great buildings to visit; its charm lies on the streets and canals themselves, the beautiful view from the top of Mount St. Claire and the peaceful beaches.

We started of our day strolling around the streets along the main canal “Canal Royal”, made our way to “La Criée” , a fish auctioning house where buyers from restaurants and fish shops come to get fresh fish and seafood. Unfortunately it’s closed on the weekends so we couldn’t witness the action going on inside, but we got lucky and just outside there was an importan rowing race going on.

We then made our way to a quiet beach to relax for a bit and  prepare for the climb up the hill all the way to the top of Mount St. Claire.

There are stairs that will lead you right up to Mount St. Claire, but we took the road instead, which may have been more exhausting but the plus side was that we got to see the beautiful and huge mediterrean style houses built on the mountain. I was very tempted to trespass and jump into the swimming pools of these houses. 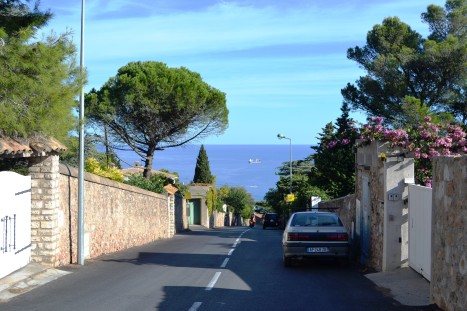 As any other port it offers a wide range of seafood dishes being oysters and mussels the most popular ones. I am not a seafood eater, but I felt like I at least had to try the fish. In all honesty the best thing on my plate was the lettuce and it freaked me out that they served me a fish with the head and skin on. My friends had mussels and they were not impressed either, but they are tough judges taking into consideration that they are from Belgium and one of their typical plates are mussels or “moules-frites”. 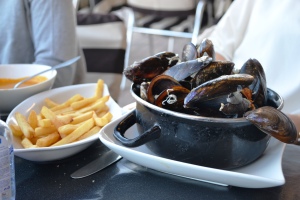 But leaving the cuisine aside, if you are travelling around the Languedoc-Roussillon region in the south of France,Sète is definitely worth a visit for a day or two.

This weekend a short train ride from Montpellier took me to the beautiful city of Nîmes which is also located in the Languedoc-Roussillon region in southern France.
Dating back to the Roman empire. Nîmes was actually an important Roman colony and “Via Domitia” , the road constructed during the empire to connect Italy to Spain passes through this city, so there is also some Spanish influence.

I was only there for one day so I visited  3 of the main sites and explored the streets of the city.

Back in the Roman empire days the amphitheatre on it’s 2 stories could accommodate 24.000 viewers

One of the best preserved Roman temples

The tower stands in the highest point of the city and played a military role as it was part of the walls built sorrounding the city . The view from the top is spectacular and you get to go up for just 3 euros (2.50 for students)

To get to the Tour-Magne you have to enter the “Jardins de la Fontaine” (“Fountain Gardens”). 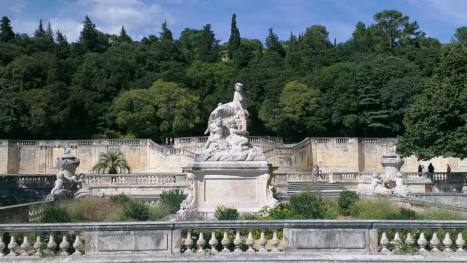 But what was special about the weekend was the “Feria des Vendanges”, a grape harvest festival that takes place every year for 3 days in September which celebrates 2 traditions, wine making and bull fighting.The athmosphere on the streets is amazing, it’s really a party that takes over the city. There are open air concerts, bars blasting the speakers and filling the air with music and paella and sangria everywhere you look. At night you can hit the clubs, but the best idea is to just stay on the streets where music is playing in every corner and people are dancing everywhere till around 3 am. 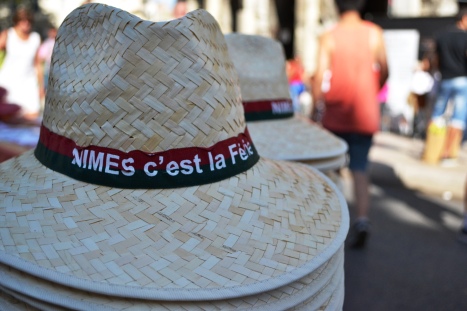 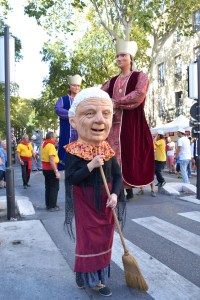 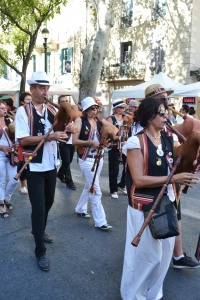 The only thing I disliked during my visit was the bull fighting, which is one of the main attractions of the weekend and takes place in the amphiteathre. During these fights, toreros kill around 6 bulls per performance with spades and make a show out of it. I understand that this is a part of many cultures and it’s done in other places of the world but it’s just something that I will never be in favour of and would never pay to watch animals get killed. Hopefully traditions like this all over the world dissappear eventually.

After the “show” was over, I snuck in the amphitheatre just to take a look at the inside, I wasn’t impressed but the sky looked beautiful. 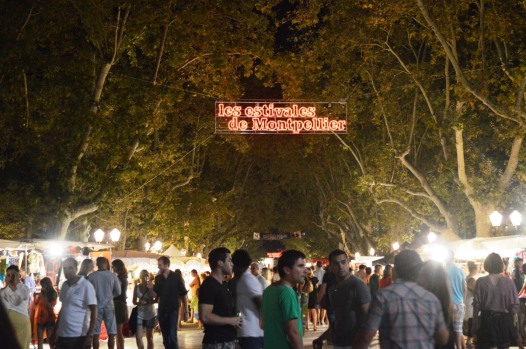 For eight years now the “Estivales de Montpellier” take place every summer once a week. This year every Friday night, since June till September 6th at the “Esplanade Charles de Gaulle” in Montpellier, this fun fair has been taking place offering wine, food, crafts and music.